The Advent Wreath and Candles: 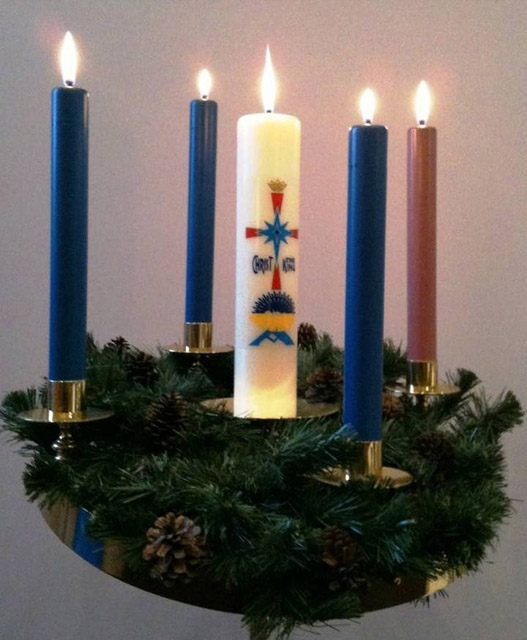 The concept of the Advent wreath originated among German Lutherans in the 16th Century. However, it was not until three centuries later that the modern Advent wreath took shape. Research by Prof. Haemig of Luther Seminary, St. Paul, points to Johann Hinrich Wichern (1808–1881), a Protestant pastor in Germany and a pioneer in urban mission work among the poor as the inventor of the modern Advent wreath in the 19th century.During Advent, children at the mission school Rauhes Haus, founded by Wichern in Hamburg, would ask daily if Christmas had arrived. In 1839, he built a large wooden ring (made out of an old cartwheel) with 20 small red and 4 large white candles. A small candle was lit successively every weekday and Saturday during Advent. On Sundays, a large white candle was lit. The custom gained ground among Protestant churches in Germany and evolved into the smaller wreath with four or five candles known today. Roman Catholics in Germany began to adopt the custom in the 1920s, and in the 1930s it spread to North America. Professor Haemig’s research also indicates that the custom did not reach the United States until the 1930s, even among German Lutheran immigrants.

In many Catholic and Protestant churches, the most popular colours for the four surrounding Advent candles are violet and rose, corresponding with the colors of the liturgical vestments for the Sundays of Advent. For denominations of the Western Christian Church, violet is the historic liturgical color for three of the four Sundays of Advent: Violet is the traditional color of penitential seasons. Blue is also a popular alternative color for both Advent vestments and Advent candles, especially in some Anglican and Methodist churches, which use a blue shade associated with the Sarum rite, in addition to Lutheran churches that also implement this practice. One interpretation holds that blue means hope and waiting, which aligns with the seasonal meaning of Advent. Rose is the liturgical color for the Third Sunday of Advent, known as Gaudete Sunday from the Latin word meaning “to rejoice”—also from the first line of the traditional entrance prayer (called the Introit) for the Mass or Worship Service of the third Sunday of Advent; it is a pause from the penitential spirit of Advent. As such, the third candle, representing joy, is often a different color from the other three. More recently, some Eastern Orthodox families have adopted an Advent wreath with six candles symbolizing the longer Christmas fast in Orthodox tradition, which corresponds to Advent in Western Christianity.

A Service of Carols and Nine Lessons:

The Festival of Nine Lessons and Carols is a service of Christian worship celebrating the birth of Jesus that is traditionally followed at Christmas. The story of the fall of humanity, the promise of the Messiah, and the birth of Jesus is told in nine short Bible readings from Genesis, the prophetic books and the Gospels, interspersed with the singing of Christmas carols, hymns and choir music. In its original format, this service would take place on Christmas Eve.

In 1878 the Royal Cornwall Gazette reported that the choir of Truro Cathedral would sing a service of carols at 10:00 p.m. on Christmas Eve.
“The Choir of the Cathedral will sing a number of carols in the Cathedral on Christmas Eve, the service commencing at 10pm. We understand that this is at the wish of many of the leading parishioners and others. A like service has been instituted in other cathedral and large towns, and has been much appreciated. It is the intention of the choir to no longer continue the custom of singing carols at the residences of members of the congregation.”

Two years later, Edward White Benson, at that time Bishop of Truro in Cornwall but later Archbishop of Canterbury, formalised the service with Nine Lessons for use on Christmas Eve (24 December) 1880. The first service took place at 10:00 p.m. on Christmas Eve. There is an oft-repeated myth that the purpose of the service was to keep men out of the pubs. While the original Service of Carols and Nine Lessons was an Anglican invention, it has since become a standard fixture for many Christian churches. It generally retains its original format, although it may also simply be an evening of carol singing accompanied by prayer.

The Jesse tree helps us connect the custom of decorating Christmas trees to the events leading to Jesus’ birth. The Jesse tree is named from Isaiah 11:1: “A shoot shall come out of the stock of Jesse, and a branch shall grow out of his roots.” Jesse was the father of King David. We adorn a Jesse tree with illustrated ornaments that represent the people, prophesies, and events leading up to the birth of Jesus. The ornaments of the Jesse tree tell the story of God in the Old Testament, connecting the Advent season with the faithfulness of God across four thousand years of history.