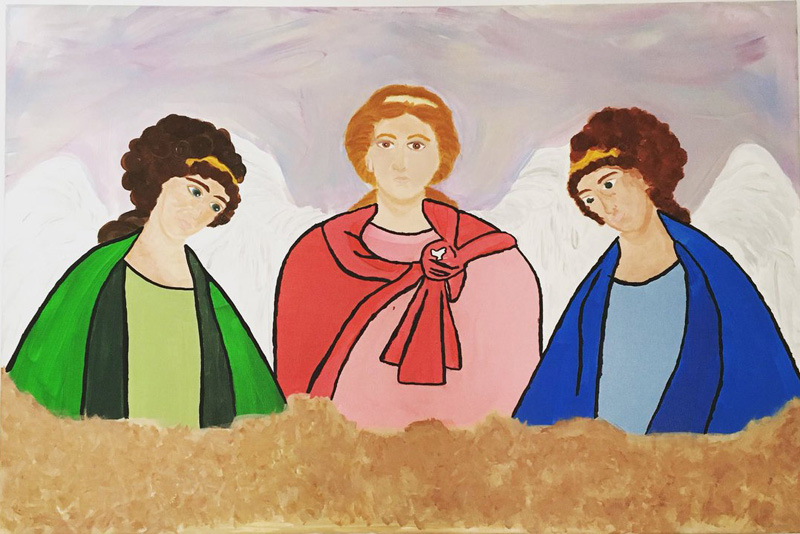 image by and courtesy of Fr.Travis Myrheim, Zenon Park Saskatchewan

Pope St. Gregory the Great distinguishes between angels and archangels: “Those who deliver messages of lesser importance are called angels; and those who proclaim messages of supreme importance are called archangels.” The Catechism explains: “From infancy to death human life is surrounded by their watchful care and intercession. ‘Beside each believer stands an angel as protector and shepherd leading him to life.’ Already here on earth the Christian life shares by faith in the blessed company of angels and men united in God” (No. 336). Today we celebrate the Feast of Sts. Michael, Gabriel and Raphael: Archangels.
Some angels are given proper names to denote the service they are empowered to perform. In that holy city, where perfect knowledge flows from the vision of almighty God, those who have no names may easily be known. But personal names are assigned to some, not because they could not be known without them, but rather to denote their ministry when they came among us. Thus, Michael means “Who is like God”; Gabriel is “The Strength of God”; and Raphael is “God’s Remedy.” In his homily for this feast day, Pope St.Gregory states:

” St. Michael:
Whenever some act of wondrous power must be performed, Michael is sent, so that his action and his name may make it clear that no one can do what God does by his superior power. So also our ancient foe desired in his pride to be like God, saying: I will ascend into heaven; I will exalt my throne above the stars of heaven; I will be like the Most High.  He will be allowed to remain in power until the end of the world when he will be destroyed in the final punishment. Then, he will fight with the archangel Michael, as we are told by John: A battle was fought with Michael the archangel.

Gabriel & Raphael:
So too Gabriel, who is called God’s strength, was sent to Mary. He came to announce the One who appeared as a humble man to quell the cosmic powers. Thus God’s strength announced the coming of the Lord of the heavenly powers, mighty in battle. [Luke 1:11-38]
Raphael means, as I have said, God’s remedy, for when he touched Tobit’s eyes in order to cure him, he banished the darkness of his blindness. Thus, since he is to heal, he is rightly called God’s remedy.”

“Holy Archangels, Pray for us and for  vocations to religious life. The the harvest is great but the laborers are few”