"A Place for Your Soul in the Heart of the Valley"
Homepage > Uncategorized > St. Bernard’s / Our Lady of the Assumption Parish
SUBSCRIBE TO OUR EVENTS FEED

St. Bernard’s / Our Lady of the Assumption Parish 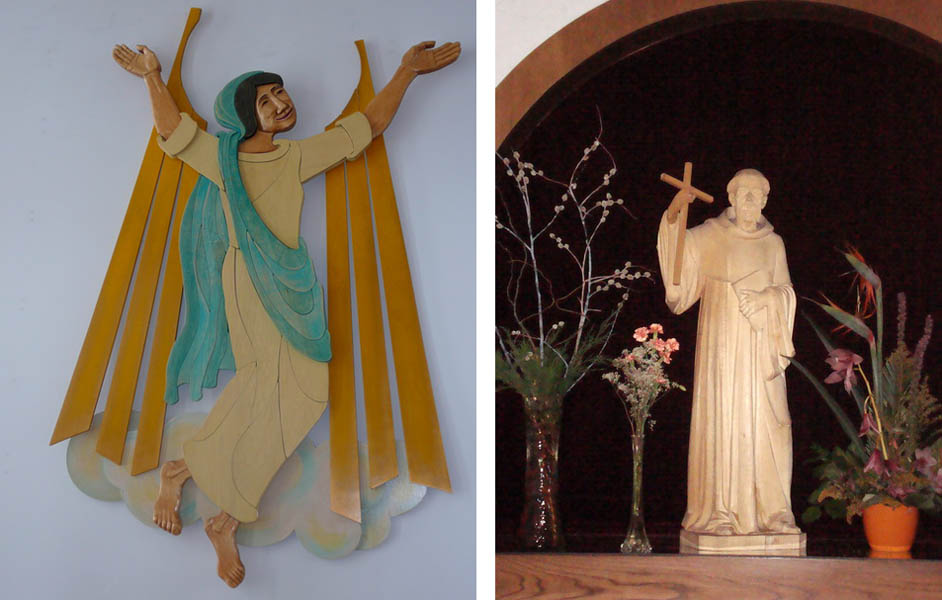 Our Lady of the Assumption:
In the early 1920s, Fr. A. M. MacDonald, DD, traveled from St. Mary’s Cathedral in Calgary to Bowness to celebrate Mass for patients at the Baker Sanatorium. More than two decades later, altar boy Charles Clancy, who accompanied him on his initial trip to ‘the little mission at the end of the streetcar line,’ returned to the town as the founding pastor of an independent Bowness parish. In 1930, the Diocese had designated the district of Bowness-Critchley as part of its newly formed parish of St. John’s. As the journey from Bowness to St. John’s Church was long, however, most Catholics in this western arm of the parish assembled for Mass at a variety of makeshift locales, including R.B. Bennett school and a neighbourhood Scouting hall. In 1948, as the populations of Bowness and Critchley expanded, St. John’s pastor, Fr. Lynett, joined forces with his small distant parishioners to build a chapel on a property donated by Bowness resident Anthony Schmaltz.

The first Church and rectory On Bow Crescent opened in 1950.  The building was sold in 1961, and still stands, converted into a house. The new Church in its present location was donated by Mr Smaltz.  Masses were held  at Assumption school until the new church was ready

Two years later, the Diocese erected a formal parish around the little church, which had been dedicated to Our Lady of the Assumption. Fr. Clancy became the first parish priest. As immigrants from the Netherlands and other European countries gravitated to Bowness after World War II, the Roman Catholic community continued to expand. By 1958, Bowness had its own separate school system, which operated under the tutelage of the Sisters of St. Louis and six lay teachers. In 1963, Fr. C.J. Clancy blessed a new church on 39th Street, NW The following year, the rapidly growing town became a suburb of the city of Calgary
The oil boom of the 1970s and political events of the 1980s dramatically affected Our Lady of Assumption’s demographic profile. Apartment blocks built to accommodate oil workers began replacing single-family dwellings on old neighbourhood streets. In the 1980s, many Vietnamese families fleeing their native country settled here. Fr. Dominic Phamvanbao, who administered the parish from 1986 to 1990 and was himself a Vietnamese refugee, welcomed the new arrivals into the parish, and provided invaluable service as an interpreter not just for the newcomers in Bowness, but also for immigrants sponsored by other Calgary parishes. Our Lady of the Assumption rejoined St. John’s Parish in 1991. After St. John’s closure in 2001, it became a mission of St. Bernard’s Parish.

St.Bernards:
As the population of Montgomery expanded in the 1950s, it became increasingly clear that northwest Calgary’s existing churches could not provide the district’s Catholic residents with adequate pastoral care. Our Lady of the Assumption in Bowness was too small to accommodate the people of Montgomery. Distance made St. John’s Church inaccessible for most. Early in 1956, Bishop Carroll therefore erected a new parish west of 24th Street NW, placing it under the care of the Pallotine Fathers. In February, Fr. T. Gerharz, SAC, and his new congregation assembled at St. Peter’s School in St. John’s Parish for their first Mass. Although parishioners had soon amassed funds for a church, the routing of the Trans-Canada Highway by the proposed site on 37th Street NW, and subsequent negotiation difficulties with the Alberta Government delayed actual construction for several years. It was not until Christmas of 1959 that St. Bernard’s Church finally opened its doors. The transformation of 16th Avenue into the Trans-Canada Highway,together with the amount of land set aside for the University of Calgary and Foothills Hospital in the 1960s, reduced Montgomery’s residential growth potential to a far greater extent than city planners and the Catholic
Diocese had anticipated. After Fr. Lynett’s death in 1964, the Diocese therefore offered Fr. Gerharz the pastorate at adjacent St. John’s Parish. St.John’s former administrator, Fr. A. Lowing, JCL, managed the little Montgomery parish until 1968. Resident pastors then served the community until 1991, when St. Bernard’s was re-incorporated into St. John’s Parish. In 2001, with St. John’s closure, St. Bernard’s again became a self-sustaining parish with a resident priest, Fr. A. Pereira. Our current  Pastor  is Fr. Matthew Emmelkamp.