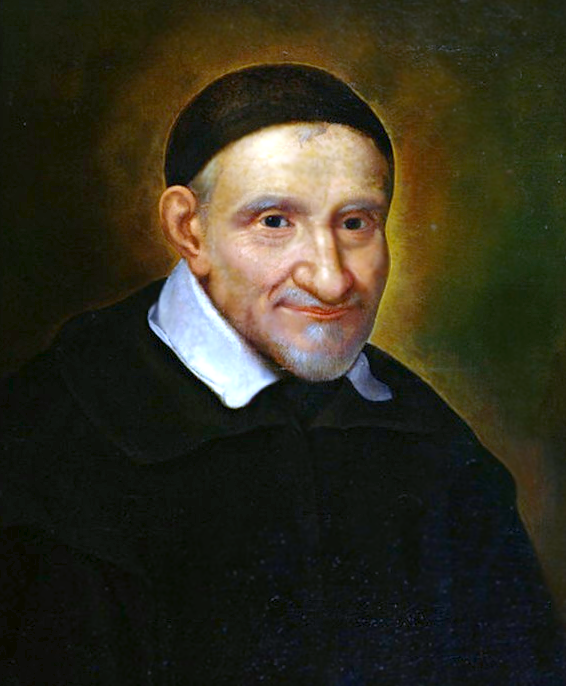 St. Vincent de Paul was born to a poor peasant family in the French village of Pouy on April 24, 1581. His first formal education was provided by the Franciscans. He did so well, he was hired to tutor the children of a nearby wealthy family. He used the monies he earned teaching to continue his formal studies at the University of Toulose where he studied theology.

While there he became a chaplain to the Count of Goigny and was placed in charge of distributing money to the deserving poor. He became pastor of a small parish in Clichy for a short period of time, while also serving as a tutor and spiritual director.

From that point forward he spent his life preaching missions to and providing relief to the poor. He even established hospitals for them. This work became his passion. He later extended his concern and ministry to convicts. The need to evangelize and assist these souls was so great and the demands beyond his own ability to meet that he founded the Ladies of Charity, a lay institute of woman, to help, as well as a religious institute of priests – the Congregation of Priests of the Mission, commonly referred to now as the Vincentians.

Two miracles have been attributed to St Vincent – a nun cured of ulcers and a laywoman cured of paralysis. As a result of the first, Pope Benedict XIII beatified him on August 13, 1729. Less than 8 years later (on June 16, 1737) he was canonized by Pope Leo XIII. The Bull of Canonization recognized Vincent for his charity and reform of the clergy, as well as for his early role in opposing Jansenism.