Saint Kateri Tekakwitha (‘ɡaderi deɡaˈɡwita in Mohawk), given the name Tekakwitha, baptized as Catherine and informally known as Lily of the Mohawks (1656 – April 17, 1680),  was an Algonquin–Mohawk laywoman. Born in the Mohawk village of Ossernenon, on the south side of the Mohawk River, she contracted smallpox in an epidemic; her family died and her face was scarred. She converted to Roman Catholicism at age nineteen, when she was renamed Kateri, baptized in honor of Saint Catherine of Siena. Refusing to marry, she left her village and moved for the remaining 5 years of her life to the Jesuit mission village of Kahnawake, south of Montreal in New France, now Canada. Tekakwitha took a devout vow of perpetual virginity. Upon her death at the age of 24, witnesses said that minutes later her scars vanished and her face appeared radiant and beautiful. Known for her virtue of chastity and mortification of the flesh, as well as being shunned by some of her tribe for her religious conversion to Catholicism, she is the fourth Native American to be venerated in the Roman Catholic Church and the first to be canonized. Under the pontificate of Pope John Paul II, she was beatified in 1980 and canonized by Pope Benedict XVI at Saint Peter’s Basilica on 21 October 2012. Various miracles and supernatural events are attributed to her intercession. 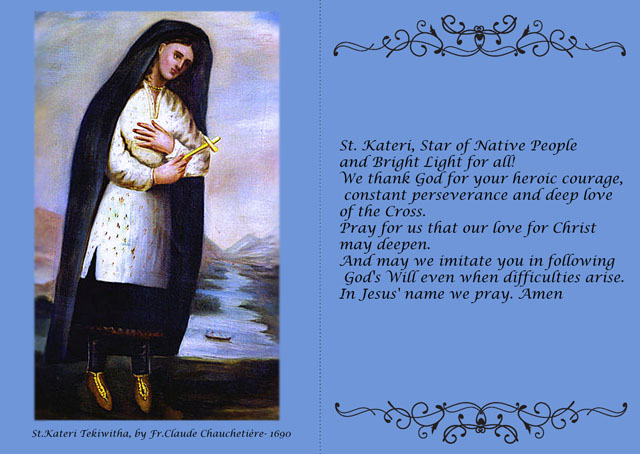