In  the 14th century there was a plague in Italy, and St. Roch went to one of the towns most affected by it.
According to the Catholic Encyclopedia:  “he devoted himself to the plague-stricken, curing them with the sign of the cross. He next visited Cesena and other neighboring cities and then Rome. Everywhere the terrible scourge disappeared before his miraculous power.”
St.Roch  eventually contracted the plague himself, but he was also cured from the disease.
In 1414, during the Council of Constance, the plague having broken out in that city, the Fathers of the Council ordered public prayers and processions in honor of the saint, and immediately the plague ceased.
Again and again , St.Roch was invoked during various medieval plagues and this is why he is labeled a patron against plagues.
This Prayer Card may be downloaded for printing by clicking on the image. It is also found in our Prayer Card section, along with other saint’s Prayer Cards. 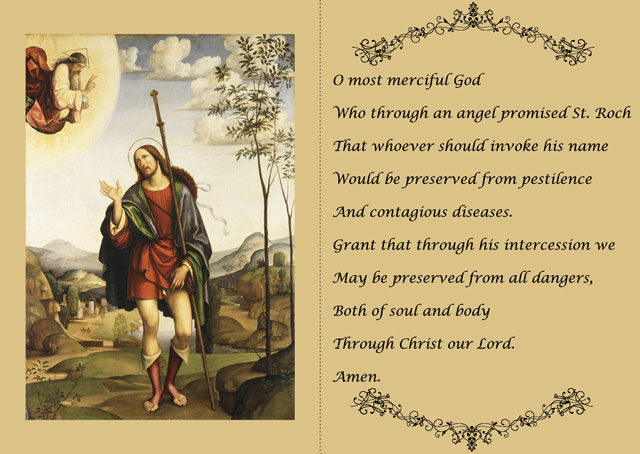