Sept. 08 – Feast of the Nativity of the Blessed Virgin Mary 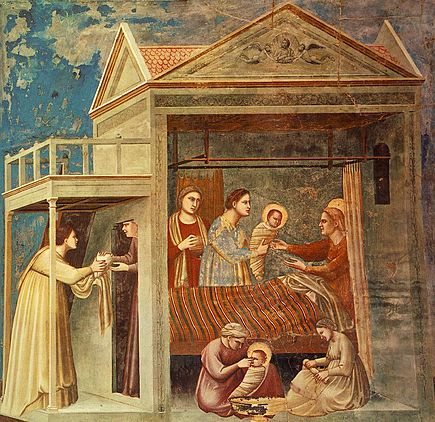 The Feast of the Nativity of the Blessed Virgin Mary, the day on which Christians East and West commemorate the birth of Mary, the Mother of God, was celebrated as early as the sixth century. We know that  Saint Romanos the Melodist, an Eastern Christian, who composed many of the hymns used in the Eastern Catholic and Eastern Orthodox liturgies, composed a hymn for the feast at that time.   A September birth was chosen because the Eastern Church begins its Church year with September. The September 8 date helped determine the date for the feast of the Immaculate Conception on December 8.

It is also an unusual feast, because it celebrates a birthday. There are only three people whose birthdays have traditionally been celebrated by Christians. Jesus Christ, at Christmas; Saint John the Baptist; and the Blessed Virgin Mary. We celebrate these birthdays for the same reason: All three were born without Original Sin. Christ, because He was conceived by the Holy Spirit; Mary, because she was kept free from the stain of Original Sin by the action of God in His foreknowledge that she would agree to be the mother of Christ; and Saint John, because he was blessed in the womb by the presence of his Savior when Mary, pregnant with Jesus, came to aid her cousin Elizabeth in the final months of Elizabeth’s pregnancy.

“Impart to your servants, we pray, O Lord, the gift of heavenly grace, that the feast of the Nativity of the Blessed Virgin may bring deeper peace to those for whom the birth of her Son was the dawning of salvation. Through our Lord Jesus Christ, your Son, who lives and reigns with you in the unity of the Holy Spirit, one God, for ever and ever.”