Sept. 14 – Feast of the Exaltation of the Cross

The Feast of the Exaltation of the Holy Cross, celebrated every year on September 14, recalls three events: the finding of the True Cross by Saint Helena, the mother of the emperor Constantine; the dedication of churches built by Constantine on the site of the Holy Sepulchre and Mount Calvary; and the restoration of the True Cross to Jerusalem in AD 629 by the Byzantine emperor Heraclius after it had fallen into the hands of the Persian emperor Chosroes II in the AD 614 Sasanian conquest of Jerusalem.Under emperor Constantine, around 327, Macarius, Bishop of Jerusalem, caused excavations to be made in order to ascertain the location of Calvary as well as that of the Holy Sepulchre. It was in the course of these excavations that the wood of the Cross was recovered. It was determined by Macarius to be authentic (the crosses of the Two Thieves were also recovered) and for it Constantine built the Basilica of the Holy Sepulchre. The feast was observed in Rome before the end of the seventh century. 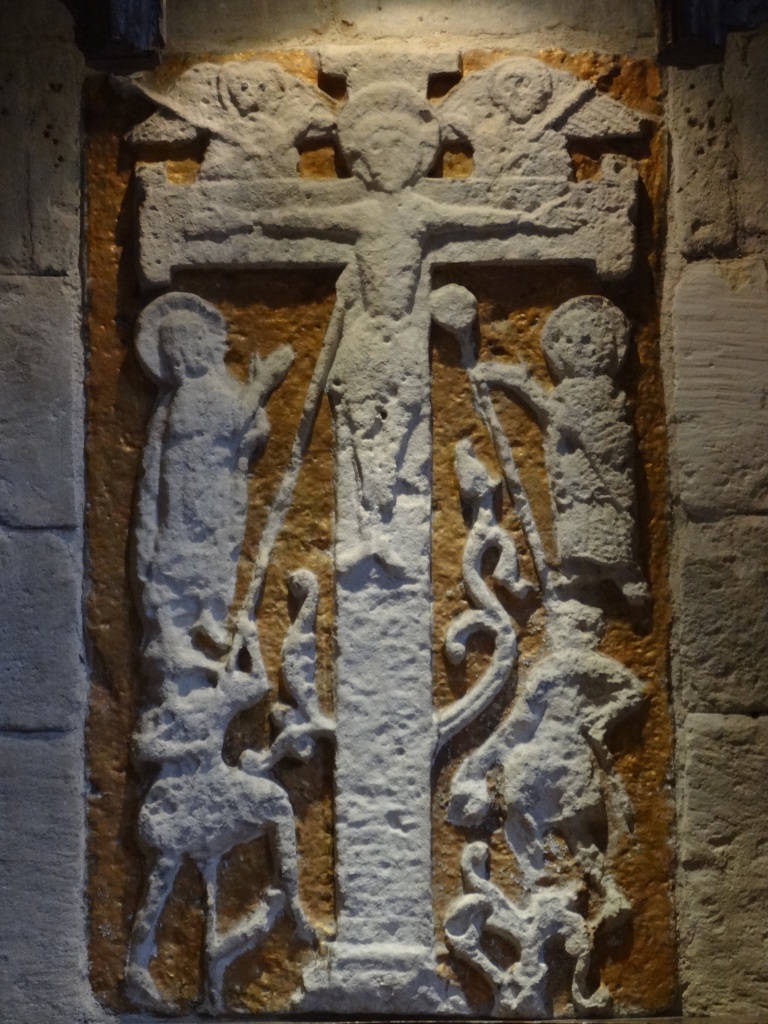 In Anglo-Saxon literature, the Exaltation of the Cross takes its most vivid form in the epic poem “The Dream of the Rood” written from the perspective of the tree that became the Cross. “Rood” is the Anglo Saxon word for the Cross, and may be seen preserved in usage in such terms as HolyRood, and in the term “rood screen” which was the ornate wooden screen that separated the chancel from the nave.The rood screen is so called because it was surmounted by the Rood itself, a large figure of the crucified Christ. Commonly, to either side of the Rood, there stood supporting statues of saints, normally Mary and St John.

In The Dream of the Rood, the cross has a voice and can feel and express emotion – ripped from its roots in the wood, it says:

“Men bore me on their shoulders there, until they fixed me on a hill;
many enemies fastened me there. Then I saw the Lord of mankind
hasten with great courage, because he wanted to climb upon me.
There I did not dare, against the Lord’s word,
to bend or break when I saw the earth’s surface
tremble. I could have
felled all those enemies, but I stood fast.
The young hero stripped himself – he was God Almighty,
strong and stout-minded. He mounted the high gallows,
courageous in the sight of many, when he intended to save mankind.
I trembled when that man embraced me; yet I dared not bow to the ground,
fall to the surface of the earth, but I had to stand fast.
As a rood was I reared. I lifted the mighty King,
the Lord of the heavens; I did not dare to bend.
They drove me through with dark nails. On me those sores are seen,
open wounds of wickedness. I dared not harm any of them.
They mocked us, both together. I was entirely bedewed with blood
poured out from that man’s side, after he sent forth his spirit.
I experienced on that hill
many cruel events, I saw the God of hosts
severely stretched out. Darkness had
covered with clouds the Ruler’s body,
the shining brightness. A shadow passed
dark under the heavens. All creation wept,
lamented the king’s fall. Christ was on the cross.”