Sept. 14 – Feast of the Exaltation of the Holy Cross 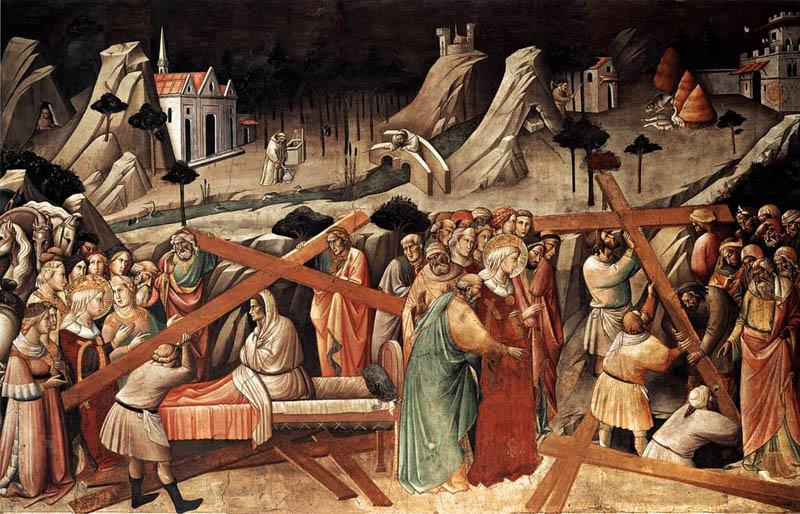 After the death and resurrection of Christ, both the Jewish and Roman authorities in Jerusalem made efforts to obscure the Holy Sepulchre.  The earth had been mounded up over the site, and pagan temples had been built on top of it. The Cross on which Christ had died had been hidden (tradition said) by the Jewish authorities somewhere in the vicinity. According to tradition, first mentioned by Saint Cyril of Jerusalem in 348, Saint Helena, the mother of the Emperor Constantine, decided under divine inspiration to travel to Jerusalem in order to excavate the Holy Sepulchre and attempt to locate the True Cross. A Jew by the name of Judas, aware of the tradition concerning the hiding of the Cross, led those excavating the Holy Sepulchre to the spot in which it was hidden. Three crosses were found on the spot. According to one tradition, the inscription Iesus Nazarenus Rex Iudaeorum (“Jesus of Nazareth, King of the Jews”) remained attached to the True Cross.  In a more well known tradition, the inscription was missing, and Saint Helena devised an experiment to determine which was the True Cross. She  had the three crosses were taken to a woman who was near death, who when she touched the True Cross, she was healed.

In celebration of the discovery of the Holy Cross, Constantine ordered the construction of churches at the site of the Holy Sepulchre and on Mount Calvary. Those churches were dedicated on September 13 and 14, 335, and shortly thereafter the Feast of the Exaltation of the Holy Cross began to be celebrated on the latter date. The feast slowly spread from Jerusalem to other churches, until, by the year 720, the celebration was universal.