The Humility of Mary

Humility is essential for the development of all the virtues. Saint Alphonsus Liguori teaches that Mary had perfection in humility.

“Humility,” says St. Bernard of Clairveaux, “is the foundation and guardian of virtues;” and with reason, for without it no other virtue can exist in a soul. Should she possess all virtues, all will depart when humility is gone. But, on the other hand, as St. Francis de Sales wrote to St. Jane Frances de Chantal, “God so loves humility, that whenever He sees it, He is immediately drawn thither.” This beautiful and so necessary virtue was unknown in the world; but the Son of God Himself came on earth to teach it by His Own example, and willed that in that virtue in particular we should endeavor to imitate Him: Learn of Me, because I am meek and humble of heart. Mary, being the first and most perfect disciple of Jesus Christ in the practice of all virtues, was the first also in that of humility, and by it merited to be exalted above all creatures. It was revealed to St. Matilda that the first virtue in which the Blessed Mother particularly exercised herself, from her very childhood, was that of humility… The first act of humility of heart is to have an humble opinion of ourselves; and Mary always thought so lowly of herself, as was revealed to the same St. Matilda, that although she saw so many more graces bestowed upon her than upon others, she preferred all others before herself… Mary, the more she saw herself enriched, the more humble she became, remembering that all was the gift of God; whence she herself said to St. Elizabeth, a Benedictine nun: “Know for certain that I esteemed myself most abject, and unworthy of the grace of God.” And therefore, says St. Bernardine, no creature in the world has been more exalted, because no creature has ever humbled herself more than Mary.” 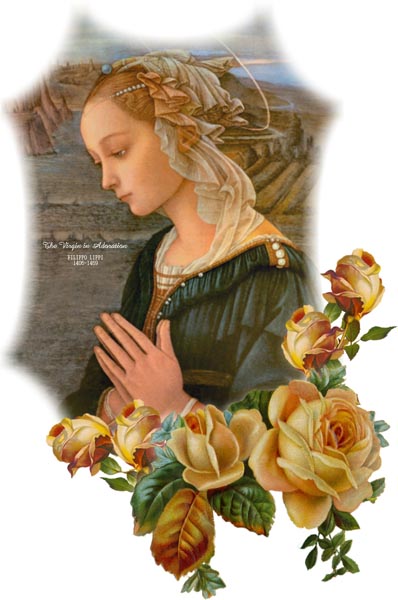 “O, how dear are humble souls to Mary,” says St. Bernard; “this Blessed Virgin recognizes and loves those who love her, and is near to all who call upon her; and especially to those whom she sees like unto herself in chastity and humility.” Hence the Saint exhorts all who love Mary to be humble: “Emulate this virtue of Mary, if thou lovest her.” Marinus, or Martin d’ Alberto, of the Society of Jesus, used to sweep the house, and collect the filth, through love for this Blessed Virgin. The Divine Mother one day appeared to him, as Father Nieremberg relates in his life, and thanking him, as it were, said, “O, how pleasing to me is this humble action done—for my love.”

“Then, O my queen, I can never be really thy child unless I am humble; but dost thou not see that my sins, after having rendered me ungrateful to my Lord, have also made me proud? O my Mother, do thou supply a remedy. By the merit of thy humility obtain that I may be truly humble, and thus become thy child, Amen. “

TAKEN FROM THE GLORIES OF MARY by Saint Alphonsus Liguori with Nihil Obstat and Imprimatur, 1931